Why Do Cruise Ships Have Fins Under The Sea?

On one of my cruises, I was on the promenade deck it was a little windy and rocky; I love being out on deck when the weather is a little wild, looking over the side, watching the waves pitching up and down, and I saw these fins jutting out under the water.  I had never seen that before and wondered what they did; this is what I found out.

Why Do Cruise Ships Have Fins Under The Sea?

They are a stabilizer that protrude out the hull called hydraulic active fin stabilizers necessary on Cruise ships because they are fast-acting.  They also only work if the ship moves through the water at a minimum speed of 6 knots. A cruise ship’s average speed is 20 – 25 knots.

How do the Fin Stabilizers work? 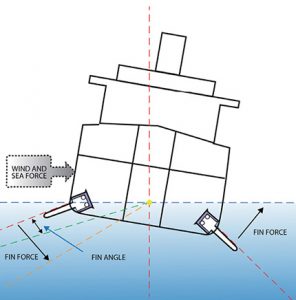 How they work is depending on the sea and wind conditions. They can be adjusted by an onboard control system on the Bridge, then the Hydraulic system kicks in, keeping the ship stable.  The fins are then retracted into the hull of the ship, allowing the ship to dock.

These fins are mounted beneath the waterline and are deployed when the wind or the sea picks up; that’s why you won’t see them on a calm day or as the ship docks.  They are deployed laterally from the hull to reduce a ship’s roll due to wind or waves.

A gyroscopic control system controls active fins.  When the gyroscope senses the ship roll, it changes the fins’  angle to exert force to counteract the roll.

It is a very effective way of stabilizing a ship in windy or choppy sea weather.  They work by moving up or down when the vessel is in motion. The lift produced by the fins should work against the roll moment of the vessel. Two wings, each installed underwater on either side of the ship, are used to accomplish this.

The fins are about 7.5 meters (25 feet)-long that extend out from either side of the ship. They typically reside below the waterline, which is probably why you’ve likely never seen them unless the ship’s in dry dock.  But you can see them in the water; if you fancy looking over the side on a choppy day, do be careful.

If the weather is so bad, you will still feel the ship rocking; when it is really windy, or the sea is rough, the active fins can only do so much.  If you suffer from seasickness, choose your itinerary carefully, perhaps a gentle cruise around the Caribbean or port hopping along the Amalfi coast.

Another Tip.  Choose your cabin towards the lower decks mid-ship. These active fin stabilizers can deal with the side to side rolling but not the pitching up and down from the front of the vessel.  Although the Captain of the bridge will turn the ship accordingly so the waves are lapping along the side of the ship rather than the front but sometimes it can’t be helped and choosing a cabin centrally located mid ship will experience less rocking and rolling.

What happens to the Fin Stabilizers when the ship docks up alongside a pier?

For docking, the fins are retracted, which can prove problematic if the weather is bad, so sometimes a ship will miss a port if it cannot dock safely due to high winds.  But it is amazing how a ship can dock in high winds; here is a great video from Discovery Canada – Mighty Cruise ships.   Koningsdam’s highest-ranking female officer Sabine is at the helm. (Excerpt from Mighty Cruise Ships, S3 E3)

Here is a great video of how the active fins are deployed and retracted when the ship stops or docking next to a pier.

Does the Captain use Fin Stabilizers all the time?

The active fins are located near midship, port side, and starboard. The angles move automatically using a hydraulic tilting gear continuously varies the angle of attack of the fins.  Reducing the ship’s tendency to roll. Active-fin stabilizers require ship forward motion to develop lift.  So as a ship enters a port to dock or if it isn’t moving for whatever reason, the fins have no use and are not used.  These are a godsend on a ship as it glides through the ocean on a sea day if the conditions are windy and choppy.  The Captain retracts the fins when the ship is still coming into the dock or tight sailing lanes such as the Panama Canal.

What happens to a ship when they switch the Fin Stabilizers off?

The Captain needs to switch them off when the ship isn’t moving, entering a narrow canal or channel, and dock alongside a pier.  The ship can start to pitch and roll, which feels weird after the ship has felt a steady sail so far on your trip.  As a ship comes into port, it is common to see guests go from side to side along the corridor as they Zig Zag their way to breakfast.  Or if your ship is approaching the Panama Canal or just adrift in a bay preparing to drop anchor such as Acapulco.  This is a great video demonstrating when a ship has switched off the active fin stabilizers as they come into port Tauranga City Harbor, New Zealand.

Take the red play circle and move it across, speeding up the video, and you can really see the ship moving in calm-looking waters too, which proves how effective these Active Fins are as stabilizers.

Do Fin Stabilizers save on energy?

Cruiselines are making strides to save energy and be more environmentally friendly, so do stabilizers save any energy?  They create drag as they attempt to stabilize the ship, reducing the ship’s speed and fuel efficiency.  However, you could argue that the fuel energy the ship would use without the stabilizers would far outweigh that.  So it’s a balance, get it?  Haha, balance! These are not a major part of energy efficiency. The below areas are where a cruise line would look to become environmentally friendly when it comes to the running of the ship:

When were fin stabilizers invented?

One of the most famous ships to first use an anti-rolling gyro was the Italian passenger liner SS Conte di Savoia, which first sailed in November 1932.

Conte di Savoia had one unusual feature designed to increase passenger numbers. Three giant anti-rolling gyroscopes were fitted low down in a forward hold. These rotated at high revolutions and were designed to eliminate rolling – a persistent problem on the rough North Atlantic crossing that affected all shipping lines.[2] In practice, they reduced the rolling by slowing down the rolling period; however, they also caused the vessel to “hang” annoyingly when the vessel was on the extreme limit of her rolls.  (Courtesy of Wikipedia)

Which Cruise Ships are the most stable?

What happens if the Fin Stabilizers fail?

What other technology does a ship use to stabilize the ship?

Passive stabilizers called a bilge keel form a metal strip along the length of the hull. They produce turbulence when the ship’s hull moves up and down.  Another form of stabilizer is anti-roll tanks, tanks of water on extreme sides of the ship, and a crossover pipe. In an upright ship, the amount of fluid inside the tanks will be the same. When the waves interact, the fluid starts to flow to another side from the crossover pipe. Using the weight of the extra fluid in the other tank, the ship actually does stabilize itself, but it isn’t instant.

If you would like to Subscribe here to join Cruise Shop Save, we provide FREE port and shopping maps, coupons, and a monthly newsletter packed with Cruise News, Fun Destination Information, and Travel Tips.